Ugo Humbert is a French professional tennis player who achieved a career-high singles ranking of World No. 25 on June 21, 2021, and a doubles ranking of world No. 361 on October 14, 2019. Turning professional in 2016, Humbert has won three ATP titles, the first in January 2020, in Auckland, beating fellow Frenchman Benoit Paire in three sets. He won his second ATP title in Antwerp in October 2020, beating fellow Next Generation ATP Finals player Alex De Minaur in straight sets. He won his third title and first ATP 500 in June 2021 in Halle, beating world No. 7 Andrey Rublev in the final. Humbert holds six Challenger titles and reached the final in three other Challenger events. 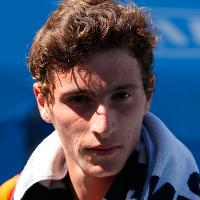 Ugo Humbert Facts:
*He was born on June 26, 1998 in Metz, France, to parents Eric and Anne, and has a sister named Léa.
*Both of his parents and sister are butchers and caterers and run a renowned store in Metz.
*He turned professional in 2016.
*He made his Grand Slam singles debut as a qualifier at the 2018 US Open.
*He won his first ATP 250 main-draw match on home soil at the 2018 Moselle Open, defeating Bernard Tomic in three sets.