Urvashi Rautela is an Indian actress, model and beauty queen, active primarily in Bollywood films. She was crowned Miss Diva 2015 beauty pageant and represented her country (India) at the Miss Universe 2015 pageant. She made her Bollywood debut with the 2013 film Singh Saab the Great. She has since starred on numerous films, including Sanam Re, Great Grand Mast, Kaabil and the 2018 revenge thriller film Hate Story 4. She made her first television appearance on the comedy talk show, The Kapil Sharma Show in 2016. Born on February 25, 1994 in Uttarakhand, India, to Manvar and Meera Singh, her younger brother Yashraj Rautela is a pilot. After graduating from DAV School, she enrolled at Gargi College. She started her modeling career at the age of fifteen. 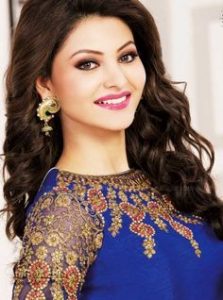 Urvashi Rautela Facts:
*She was born on February 25, 1994 in Uttarakhand, India.
*She competed in the Miss Teen India competition at age 15, in 2009.
*While growing up, she wanted to become an engineer.
*She is a national level basketball champion.
*She won the Miss Tourism Queen of the Year International commendation in 2011.
*She was named as the Youngest Most Beautiful Woman In The Universe 2018 by the government and tourism of Andaman & Nicobar Islands.
*Follow her on Twitter, Facebook and Instagram.