Usher is an American R&B and pop singer known for his music skills and hit albums such as Confessions, Looking 4 Myself and My Way. Born as Usher Terry Raymond IV in Dallas, Texas, Usher is the son of Jonetta Patton and Usher Raymond III. He began singing in his church choir at age nine, and released his debut album at age 15. His hit album Confessions became the fastest-selling R&B album in history. 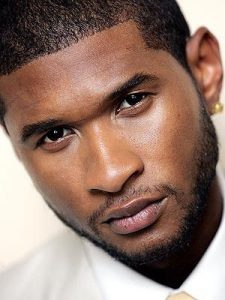 Usher Facts:
*He lost his father at the age one.
*He started singing in his church choir at age nine.
*He was Ranked #47 on VH1’s 100 Sexiest Artists.
*He has known singer and songwriter Alicia Keys since he was age 16.
*He is good friends with R&B/Soul artist Robin Thicke, Ludacris, T.I., Naomi Campbell, and Mariah Carey.
*Has a road named after him, the Usher Raymond Parkway in Chattanooga, Tennessee.
*Follow him on Twitter, Facebook, Myspace, YouTube, and Instagram.