Vanessa Lachey is an American television personality, fashion model, beauty queen and actress who won Miss Teen USA 1998 beauty pageant. She co-hosted the MTV’s Total Request Live from 2003 to 2007, and worked as a New York-based correspondent for Entertainment Tonight from 2005 to 2007. She had a recurring role on The Bold and the Beautiful and played Camilla in the series Dads. Her other television credits include Truth To Be Told, Wipeout, 30 Rock, and The First Wives Club. Born Vanessa Joy Minnillo on November 9, 1980 in Clark Air Force Base, Philippines, to Helen Bercero and Vince Minnillo, she is of Italian and Irish descent on her father’s side, and of Filipino descent on her mother’s side. She has an older adopted brother, Vincent. She made her television debut through the television series, “That’s Life” as a role of Cheerleader. She has been married to Nick Lachey since 2011. They have three children: two sons, Phoenix and Camden, and a daughter, Brooklyn. 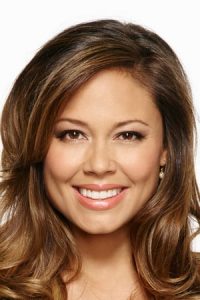 Vanessa Lachey Facts:
*She was born November 9, 1980 in Angeles City, Philippines.
*She is of Filipino, Ashkenazi Jewish, Italian, and Irish descent.
*Her parents divorced when she was six years old.
*She was a cheerleader while in high school.
*She was crowned Miss South Carolina Teen USA 1998 beauty pageant.
*She served as a judge on the Miss Teen USA 2003 program.
*She ranked #62 in 2005, #15 in 2006, #64 in 2007 and #69 in 2008 in the Maxim magazine’s Hot 100 lists.
*She is fluent in Pig Latin.
*She is allergic to cats.
*Visit her official website: www.vanessalachey.com
*Follow her on Twitter, Pinterest, Facebook and Instagram.