Vanna White is an American actress and television personality. She is most famous as the hostess of the game show, Wheel of Fortune. She began appearing on the show in 1982, replacing Susan Stafford. She was a contestant in the Miss Georgia 1978 pageant before her appearance on television in 1980. She was among first four contestants on an episode of The Price Is Right. Her film credits include Naked Gun 33⅓: The Final Insult, Double Dragon, and Graduation Day. Born Vanna Marie Rosich on February 18, 1957 in Conway, South Carolina, to Joan Marie and Miguel Angel Rosich, she was raised by her mother and her stepfather, Herbert White. She belongs to Puerto Rican, German and Italian descent. She has a younger brother named Herbert. After graduating from North Myrtle Beach High School, she moved to Atlanta, Georgia, where she attended the Atlanta School of Fashion and worked as a model. She was married to George San Pietro from 1990 to 2002. She has two children: son, Niko and daughter, Gigi. 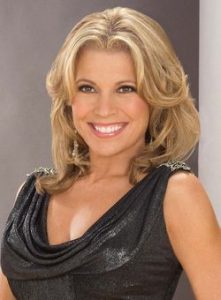 Vanna White Facts:
*She was born on February 18, 1957 in Conway, South Carolina.
*Her parents divorced when she was still an infant and her mother remarried to Herbert Stackley White Jr.
*She was a high school cheerleader.
*She worked as a professional model before her appearance on television.
*Visit her official website: www.vannawhite.com
*Follow her on Twitter, Facebook and Instagram.