Quavo Marshall is an American rapper, musician and songwriter. He is best known as a member of the hip hop and trap trio ‘Migos’, along with Kirshnik Ball, AKA Takeoff, and Kiari Cephus, AKA Offset. Migos released its first album Yung Rich Nation in 2015, which peaked at #3 on the Top Rap Albums chart in U.S. Their second album, Culture, was a huge hit and debuted atop the Billboard 200 chart. Migos is known for their hits ‘Versace,’ ‘MotorSport,’ and ‘Bad and Boujee.’ Born Quavious Keyate Marshall on April 2, 1991 in Lawrenceville, Georgia, USA, to Lilian Janet Bird and Frank Morley, he was raised in Gwinnett County. His mother was a hairdresser and his father died when he was 4 years old. He attended Berkmar High School. 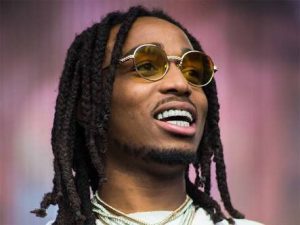 Quavo Marshall Facts:
*Born on April 2, 1991 in Lawrenceville, Georgia, his real name is Quavious Keyate Marshall.
*He lost his father when he was four years old.
*He used to play in high school football team.
*His band Migos was known by the name of Polo Club until 2010.
*Alongwith fellow rappers Takeoff and Offset, he formed Migos in 2009.
*Complex Music named him the most influential rapper of early 2014.
*With Migos, he has collaborated with such artists as Young Thug, Drake, R. Kelly, Gucci Mane, and many more.
*Visit his official website: www.yungrichnation.com
*Follow him on Twitter, SoundCloud, YouTube, Facebook and Instagram.