Vera Lapko is a Belarusian professional tennis player who achieved a career-high singles ranking of World No. 60 on 1 October 2018, and a doubles ranking of world No. 83 on 14 May 2018. Turning professional in 2015, Lapko has won six singles titles and seven doubles titles on the ITF Circuit. She reached the 2014 US Open and 2015 Wimbledon girls’ doubles finals, both times partnering Tereza Mihalíková. Lapko won the 2016 Australian Open girls’ singles title, defeating Mihalíková in the final.

Born on September 29, 1998 in Minsk, Belarus, her full name is Vera Valeryevna Lapko. Lapko started playing tennis at the age of five and prefers to play on clay courts. 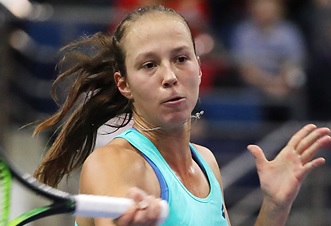 “Our family lived just a five-minute walk from the tennis courts.” “My parents decided to bring my brother into that tennis club and he started to play tennis, but I started my sport career in figure skating – it was very popular in our country that time, so my mom wanted me to do it. – Vera Lapko

Vera Lapko Facts:
*She was born on September 29, 1998 in Minsk, Belarus.
*She began playing tennis when she was five years old.
*She made her professional debut in 2015.
*Her favorite surface is clay.
*She plays right-handed and has a two-handed backhand.
*She won the Australian Open women’s junior competition 2016.
*She has a career-high singles ranking of No. 60.
*Follow her on Twitter and Instagram.