Vin Diesel is an American actor, producer, director and screenwriter. He is best known for his roles as Dominic Toretto in the Fast and the Furious films, Richard B. Riddick in the Chronicles of Riddick franchise and Xander Cage in the xXx series. He also starred in Pitch Black, A Man Apart, The Pacifier and Find Me Guilty. He also voices characters in the Guardians of the Galaxy films. He is the founder of the production companies Racetrack Records, One Race Films and Tigon Studios. Born Mark Sinclair on July 18, 1967 in Alameda County, California, USA to Delora and Irving Vincent, Diesel and his twin brother Paul were raised by their mother and their stepfather of African-American descent. In addition to his fraternal twin Paul Vincent, he has a younger sister, Samantha Vincent, and a younger brother, Tim Vincent. He is of African-American descent on his father’s side, and of English, German, Irish and Scottish descent on his mother’s side. He attended Hunter College but dropped out after three years in order to create his first film, Multi-Facial. He has been in a long term relationship with Paloma Jiménez with whom he has two daughters named Hania and Pauline and a son named Vincent. 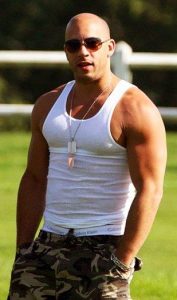 Vin Diesel Facts:
*He was born on July 18, 1967 in Alameda County, California, USA.
*He was raised by his stepfather, and has never ever met his biological father.
*He first acted on stage at 7.
*He used to work as a bouncer at New York clubs.
*He was ranked #46 in Premiere magazine’s 2003 annual Power 100 List.
*He dated actress Michelle Rodriguez in 2001.
*Visit his official website: www.vindiesel.com
*Follow him on Twitter, Facebook and Instagram.