Vina Morales is a Filipina singer, actress and model. She is known for her roles in television, such as Nasaan Ka Elisa?, Darating ang Umaga, May Isang Pangarap, and Born for You, and in the films Bonifacio: Ang Unang Pangulo, The Sarah Balabagan Story, Ang Boyfriend Kong Pari, Eto na naman ako, and Sagot Kita: Mula Ulo Hanggang Paa. Vina released her self-titled debut album, Vina, in 1990 with Viva Records, followed by her second album, Forbidden in 1992. Her 1999 album “No Limits” won the Best Album of the Year at the Awit Awards. Born as Sharon Garcia Magdayao on October 17, 1975 in Bogo, Cebu, Philippines, she is the daughter of Deanne and Enrique Magdayao, and sister of actress and dancer Shaina Magdayao. She is of Spanish descent on her mother’s side, and of Cebuano descent on her father’s side. She began her acting career as a child actress in the 1986 film Nakagapos na puso. She has a daughter named Ceana born in 2009. 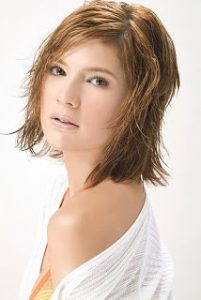 Vina Morales Facts:
*She was born in Bogo, Cebu, Philippines on October 17, 1975.
*She began her career as a child actress.
*She was romantically linked to Filipino politician Miguel Zubiri.
*Follow her on Instagram.