Waka Flocka is an American rapper. His best known hits include “Hard in da Paint”, “O Let’s Do It” and “No Hands”. Flocka released his debut studio album, Flockaveli, in 2010, followed by his second studio album, Triple F Life: Friends, Fans & Family in 2012. Both albums debuted in the top 10 on the US charts. Born Juaquin James Malphurs on May 31, 1986 in South Jamaica, New York, USA, his family eventually settled in Riverdale, Georgia. His mother, Debra Antney, is rapper Gucci Mane’s former manager and the CEO of So Icey/Mizay Entertainment. He was given the nickname ‘Waka’ by his cousin after the Muppets character Fozzie Bear’s catchphrase, “Waka Waka”. In 2014, he married longtime girlfriend and television personality Tammy Rivera. 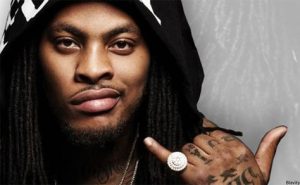 Waka Flocka Facts:
*He was born on May 31, 1986 in South Jamaica, New York, USA.
*He was given the stage name ‘Waka’ by his cousin.
*His younger brother and fellow rapper KayO Redd committed suicide at his home in Henry County, Georgia in December 2013.
*His highest-charting single, “No Hands” featuring Roscoe Dash and Wale, reached #13 on the US Billboard Hot 100.
*In 2011, he posed nude for PETA to encourage people to stop killing animals.
*He was shot two times after a robbery attempt at an Atlanta car wash on January 19, 2010.
*Visit his official website: www.wakaflocka.com
*Follow him on Twitter, Facebook, Soundcloud, Myspace and Instagram.