Wendie Malick is an American actress, voice actress and former fashion model. She is best known for her portrayal of Judith Tupper Stone on HBO’s Dream On, and for her role as Nina Van Horn on NBC’s Just Shoot Me!, for which she was nominated for two Primetime Emmys and a Golden Globe Award. She is also known for her role as Victoria Chase in the TV Land comedy series Hot in Cleveland, and for her recurring role as Ronee Lawrence on the final season of Frasier. She has also appeared in the films Scrooged, The American President, Racing Stripes, and Confessions of a Shopaholic. She has also done voice work in The X’s, The Owl House, Ultimate Spider-Man, BoJack Horseman, Bubble Guppies, Kung Fu Panda: Legends of Awesomeness, Brother Bear 2, Bratz: Rock Angelz, The Emperor’s New Groove, The Life & Times of Tim, Fillmore, The Emperor’s New School, and Father of the Pride. Born Wendie Diane Malick on December 13, 1950 in Buffalo, New York, to parents Gigi and Ken Malick, her paternal grandfather was an Egyptian from a Coptic Christian family. Malick was educated at Williamsville South High School and Ohio Wesleyan University. Malick started her acting career on the stage in her home state after a brief stint working for then-Congressman Jack Kemp in Washington, DC, and a five-year stint as a fashion model in New York and Paris. She has been married to Richard Erickson since December 29, 1995. She was previously married to actor and screenwriter Mitch Glazer. 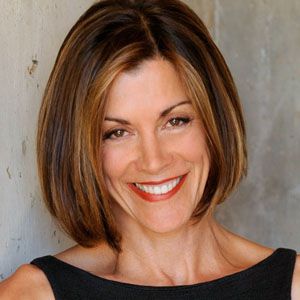 Wendie Malick Facts:
*She was born on December 13, 1950 in Buffalo, New York, USA.
*She is a graduate from Williamsville South High School.
*She graduated from Ohio Wesleyan University in 1972.
*She is a supporter of the Humane Society of the United States (HSUS).
*She is a pescetarian.
*Follow her on Twitter and Facebook.