Wesley Sneijder is a Dutch retired professional footballer who played for AFC Ajax, Real Madrid, Internazionale, Galatasaray, Ligue 1 club Nice and the Netherlands national team. He was named UEFA midfielder of the season and one of the three best midfielders in the world for 2010 by FIFA. 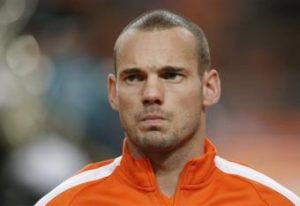