Winnie Harlow is a Canadian model and spokesperson who rose to prominence as a contestant on the 21st cycle of the U.S. television series America’s Next Top Model. She has advertised for many brands such as Desigual and Diesel. In 2016, she appeared in a Sprite commercial. Born as Chantelle Brown-Young on July 27, 1994 in Toronto, Ontario, to Lisa Brown and Windsor Young, she was raised by a single mom. She belongs to Jamaican descent and has two sisters. By the age of four, she was diagnosed with vitiligo, a skin condition that resulted in portions of her skin losing its pigment. 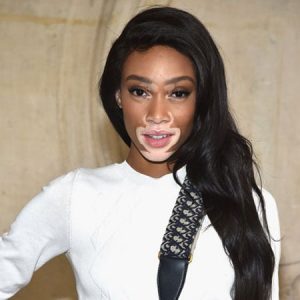 Winnie Harlow Education:
She changed many schools due to bullying.

Winnie Harlow Facts:
*She is of Jamaican descent.
*She was discovered on Instagram by model Tyra Banks.
*She has been afflicted with the skin condition vitiligo since the age of 4.
*She dropped out of school at 16 due to teasing occurred as a result of her skin depigmentation condition.
*She is a fan of Michael Jackson, roller coasters, Sex and the City and sports.
*She describes herself as “vitiligo spokesmodel.”
*In 2015, she won the “Role Model” award at Portuguese GQ Men of The Year.
*She enjoys riding roller coasters and watching basketball.
*Visit her official website: www.officialwinnieharlow.com
*Follow her on Twitter, Facebook and Instagram.