Yao Ming is a former Chinese professional basketball player who played for the Shanghai Sharks (1997–2002) of the Chinese Basketball Association and the Houston Rockets (2002–2011) of the National Basketball Association. Ming was an All-NBA Second Team selection twice and an All-NBA Third Team selection three times in his career. He was the tallest player in the NBA, at 7 feet 6 inches (2.29 m). Born on September 12, 1980 in Shanghai, China, his parents Fengdi Fang and Yao Zhiyuan were both Chinese national basketball players. He graduated with an economics degree from the Antai College of Economics and Management at Shanghai Jiao Tong University. Ming was the first overall pick of the 2002 NBA Draft. He married Ye Li in August 2007. Together they have one daughter, Yao Qinlei. 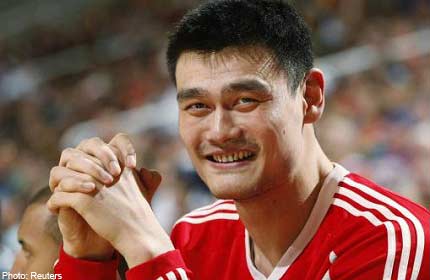 Yao Ming Facts:
*He was born on September 12, 1980 in Shanghai, China.
*His father, Yao Zhiyuan, is 6′ 7″; his mother, Fengdi Fang, is 6′ 3″ and was captain of the Chinese national women’s basketball team.
*He started with the Shanghai Sharks as a teenager and played on their senior team for five years in the Chinese Basketball Association (CBA).
*He was named an NBA All-Star during all eight of his seasons in the NBA with the Houston Rockets.
*He retired in 2011 after numerous foot and ankle injuries.
*He inducted into the Naismith Memorial Basketball Hall of Fame in 2016.
*Visit his official website: www.YaoFamilyWines.com
*Follow him on Twitter, Facebook and Instagram.