Yasmine Akram is an Irish-Pakistani actress. She is best known for her portrayal of Janine Hawkins in the third series of Sherlock. She played Maria “Jonesy” Jones in the Channel 4/Netflix comedy series Lovesick. She also served as a panelist in popular British shows such as Never Mind the Buzzcocks and BBC’s The News Quiz. Born on March 11, 1982 in Sharjah, United Arab Emirates, her mother is from Drogheda and her father is originally from Pakistan. She has one older sister named Masooma. She attended the Royal Academy of Dramatic Art and graduated with a degree in acting. 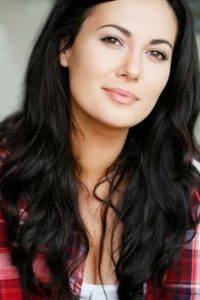 Yasmine Akram Facts:
*She was born on March 11, 1982 in Sharjah, United Arab Emirates.
*She is of Pakistani and Irish descent.
*She and her family moved to Ireland when Yasmine was eighteen months old.
*She studied acting at the Royal Academy of Dramatic Art.
*She starred as Janine on the BBC series Sherlock.
*In 2014, she appeared as a panellist in Never Mind the Buzzcocks.
*She is a part of the comedy duo Ford and Akram with comedian Louise Ford.