Yukie Nakama is a Japanese actress, singer and former idol who released her debut single “Moonlight to Daybreak” in 1996. She is known for her roles in the films “Ring 0: Birthday”, “Trick Movie”, “G@me”, “Shinobi: Heart Under Blade” and “Oh Oku”. Yukie has also appeared in commercials for companies such as Nissin Foods, Asahi, Glico, Lotte, Shiseido, au by KDDI. The youngest of five children, Yukie was born on October 30, 1979 in Urasoe, Japan, into a fisherman’s family. Yukie married actor Tetsushi Tanaka in September 2014, after a six-year relationship. They have two children. 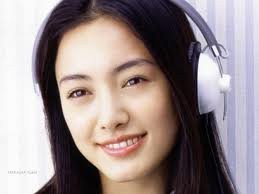 Yukie Nakama Facts:
*She was born on October 30, 1979 in Urasoe, Japan.
*Her debut single “Moonlight to Daybreak” was released in 1996
*She has the license for the second class small ship pilot.
*She served as a spokesperson for Japan Railways and the Japanese Tax Agency.