Zoe Saldana is an American actress and dancer. She is known for her roles in Avatar, Star Trek, and the Guardians of the Galaxy franchise. She played Anamaria in Pirates of the Caribbean: The Curse of the Black Pearl. Born Zoe Yadira Zaldaña Nazario on June 19, 1978 in Passaic, New Jersey, to Asalia Nazario and Aridio Saldaña, she belongs to Puerto Rican, Dominican, Lebanese and Haitian descent. She has two sisters, Cisely and Mariel Saldana, and one half-brother, Nipo Saldana. She studied ballet, jazz, and modern Latin dance in the Dominican Republic. She performed with the New York Youth Theater at age 17. She had her breakthrough roles in the films Center Stage (2000) and Crossroads (2002). She has been married to Marco Perego since 2013. They have three children. 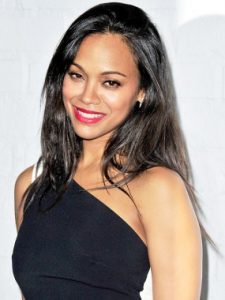 Zoe Saldana Facts:
*She was born to a Dominican father and a Puerto Rican mother.
*She is of Puerto Rican, Dominican, Lebanese and Haitian descent.
*Her first languages are English and Spanish.
*In 2014, Maxim Magazine ranked her #29 in their list of the Hot 100 Women in the world.
*She is a supporter of FINCA International, a non-profit microfinance organization.
*From 2005 to 2011, she was in a relationship with actor Keith Britton.
*Follow her on Twitter, Facebook and Instagram.