2 Chainz is an American rapper and recording artist, best known for his hit singles “Riot”, “Birthday Song”, “I’m Different” and “No Lie” (featuring Drake). He is also known for being half the duo of the rap group Playaz Circle, a southern hip-hop band created in collaboration with Dolla Boy. 2 Chainz released his debut album, Based on a T.R.U. Story, in August 2012, which achieved remarkable success, reaching #1 on the US Billboard 200 in 2012, followed by his second album, B.O.A.T.S. II: Me Time in 2013. This album debuted at #3 on the US Billboard 200 in september 2013. Born on September 12, 1977 in College Park, Georgia, 2 Chainz’s real name is Tauheed Epps. He attended at North Clayton High School (finished second in his class), Alabama State University and Virginia State University. He achieved recognition as a solo artist when he was featured on Kanye West’s 2012 single “Mercy” of his album Cruel Summer. In August 2018, 2 Chainz married his longtime girlfriend Kesha Ward, after having two daughters and a son. 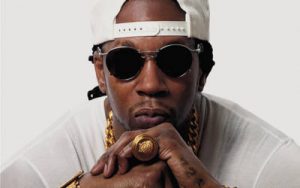 2 Chainz Facts:
*He was born in College Park, Georgia, USA on September 12, 1977.
*He was in the college basketball team while at Alabama State University.
*He began his career in 1997.
*He was appeared on Kanye West’s 2012 single “Mercy” of his album Cruel Summer.
*At 15, he was arrested for felony cocaine possession while in high school.
*He founed a line of hoodies called CEO Millionaires or Create Every Opportunity Millionaires in October 2016.
*He has his own line of sweaters called “Dabbing Sweaters.”
*Visit 2 Chainz’s official website: www.2chainz.com
*Follow 2 Chainz on Twitter, SoundCloud, YouTube, Facebook and Instagram.