21 Savage is a rapper, songwriter, and record producer who released his debut mixtape, The Slaughter Tape, on May 25, 2015. In July 2016 he released his joint EP Savage Mode with Atlanta-based record producer Metro Boomin, which achieved remarkable success, reaching at number 23 on the Billboard 200. The EP became their highest charting EP to date. On July 7, 2017 he released his debut studio album, Issa Album, which debuted at #2 on the Billboard 200 and gave him his first Billboard Hot 100 top 20 song, “Bank Account”. He has also collaborated with popular artists such as Gucci Mane, Drake, and Lil Yachty. Born Shayaa Bin Abraham-Joseph on October 22, 1992 in Plaistow, London, United Kingdom, to British-born parents Kevin Cornelius Emmons and Heather Carmillia Joseph, he belongs to Dominican and Haitian descent. His parents split when he was very small, and he moved with his mother to Atlanta, Georgia, at the age of 7. In 2013, his friend was killed in a shootout on his 21st birthday. Following the death, 21 Savage began rapping. He dated socialite, actress, and model, Amber Rose from 2017 to 2018. 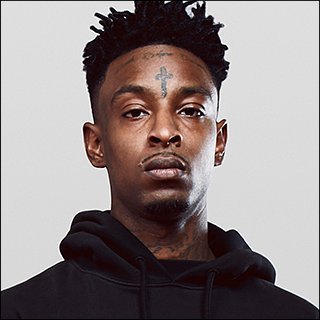 21 Savage Facts:
*He was born on October 22, 1992 in Plaistow, London, United Kingdom.
*He is of Dominican descent on his mother’s side.
*His younger brother, Quantivayus was killed in the shooting.
*He was expelled from DeKalb County schools for gun possession in the 7th grade.
*He used 21 because it was the name of his gang when he was growing up and Savage just came from the whim.
*His prominent face tattoo is actually a tribute to his little brother Tay Man, who was killed when he was younger.
*Visit his official website: www.21savage.com
*Follow him on Twitter, YouTube, SoundCloud, Facebook and Instagram.