Aaron Carter is an American rapper, singer-songwriter, actor, dancer, and record producer who first achieved fame as a pop and hip hop singer in the late 1990s. Carter released his debut single “Crush on You” in 1997, which was a Top 10 in Australia, Germany and the United Kingdom. His first album Aaron Carter was released in December 1997 in Europe, and sold more than 1 million copies worldwide. Carter’s second album Aaron’s Party (Come Get It) (2000) sold three million copies in the United States. As an actor, Carter has appeared in Lizzie McGuire, Sabrina the Teenage Witch, 7th Heaven, and Popstar. 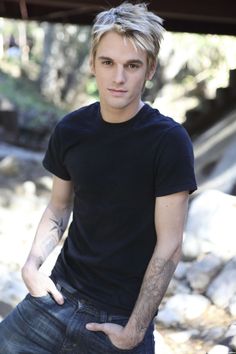 Born Aaron Charles Carter on December 7, 1987 in Tampa, Florida, to parents Robert Gene and Jane Elizabeth Carter, he has an older brother, Nick, and three sisters, Angel (twin sister), B.J. and Leslie. Carter started his music career when he was seven years old as the singer of Dead End. He was educated at the Frank D. Miles Elementary School and the Ruskin School in Florida. Carter had an on and off relationship with Hilary Duff for a few years.

Aaron Carter Facts:
*Born on December 7, 1987 in Tampa, Florida, his ancestry includes English, German, Scottish, Welsh, Irish and Ulster-Scots.
*His parents run the Garden Villa Retirement Home.
*He was named after his paternal grandfather “Aaron Charles Carter”.
*He began his music career at age seven, singing lead for the band “Dead End” for two years.
*He released his self-titled debut album in 1997 at age 9, selling a million copies worldwide.
*He plays the piano, drums, guitar and saxophone.
*He is a huge fan of Bruce Springsteen.
*Visit his official website: www.aaroncarter.com
*Follow him on Twitter, YouTube, Facebook and Instagram.