Hilary Duff is an American actress and singer. She first achieved fame for playing the title character on the series Lizzie McGuire from 2001 to 2004. She played Olivia Burke in the teen drama television series Gossip Girl. Her other television credits include Two and a Half Men, George Lopez, Frasier, and Younger. She has also played prominent roles in the films Lizzie McGuire, The Perfect Man, A Cinderella Story and Cheaper by the Dozen. Aside from her career as an actress, she has also acheived success as a singer. She debuted in the music industry with her debut studio album, Santa Claus Lane, released on 15 October, 2002 under the label Buena Vista, which achieved remarkable success, reaching the U.S. Billboard 200 and selling over three million copies in the nation. Her second studio album, Metamorphosis, went triple-platinum. Born Hilary Erhard Duff on September 28, 1987, in Houston, Texas, to Susan and Robert Erhard Duff, she has one older sister Haylie, who is also an actress and singer. She began acting when she was 8, appearing in a production of The Nutcracker. She married Mike Comrie in February of 2010, and they had a son named Luca in 2012 before getting divorced in 2016. 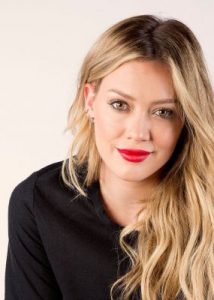 Hilary Duff Facts:
*She was born September 28, 1987 in Houston, Texas.
*Her older sister is actress Haylie Duff.
*One of People magazine’s 50 Most Beautiful People in the World (2005).
*She was ranked #58 in FHM magazine’s “100 Sexiest Women in the World 2006” supplement.
*She donated $250,000 for Hurricane Katrina victims in 2005.
*She is a huge fan of Janis Joplin.
*She enjoys reading, singing, writing, gymnastics, swimming, and hanging out with older sister, Haylie Duff.
*Visit her official website: www.hilaryduff.com
*Follow her on YouTube, Twitter, Facebook and Instagram.