Aaron Paul, born August 27, 1979, is an American actor, best known for his role Jesse Pinkman in the AMC series Breaking Bad. Paul made his film debut as Floyd in the 2000 movie, Whatever It Takes. He became an established actor, appearing in the films Need for Speed, A Long Way Down, and Exodus: Gods and Kings. Born Aaron Paul Sturtevant in Emmett, Idaho, he is the son of Darla and Robert Sturtevant. He has four older siblings. He has been married to Lauren Parsekian since 2013. 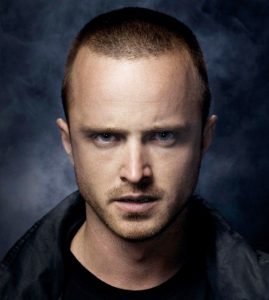 Aaron Paul Facts:
*He belongs to English, German, and Scottish descent.
*Huge fan of the band Korn.
*He has appeared in TV commercials for both Pepsi-Cola and Coca-Cola.
*He also worked as a movie theater usher at Universal Studios in Hollywood.
*Follow him on Twitter, Facebook and Instagram.