Sonakshi Sinha is an Indian actress who works in Bollywood. Sonakshi was born on June 2, 1987 in Patna, Bihar, the daughter of legendary Indian actor Shatrughan Sinha and Poonam Sinha and sister to Luv Sinha and Kussh Sinha. Sonakshi had her film debut in action-drama film Dabangg in 2010. Her other films include Rowdy Rathore, Son of Sardaar, Dabangg 2 and Holiday: A Soldier Is Never Off Duty. 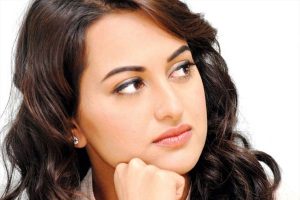 Sonakshi Sinha Facts:
*Her two elder brothers, Luv Sinha and Kush Sinha are twin.
*Before becoming a successful actress, she used to work as a costume designer.
*Her hobbies are photography, reading, dancing, and yoga.
*She drinks a lot of water to keep her skin fresh.
*She is a left hander.
*Follow her on Twitter, Facebook and Instagram.