Aarti Chhabria is an Indian actress and a former model, primarily appearing in Hindi films. She also appears in Telugu, Punjabi and Kannada films. She began her career as a model doing advertisements at the age of 3 years. As a model, Aarti has appeared for several advertisements under leading brands. She has appeared in over 300 commercials including Maggi Noodles, Pepsodent tooth paste, Clean and Clear face wash, Amul Frostick ice cream, LML Trendy Scooter, and Krack Cream. In 2002, she made her Bollywood debut in “Tumse Achcha Kaun Hai”. Aarti was born Aarti Ashok Chabria on November 21, 1982 in Mumbai, Maharashtra, the daughter of Sunita and Ashok Chabria. She has a brother named Abhishek Chabria. 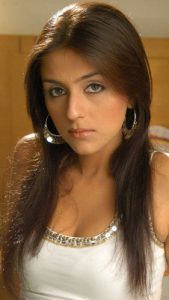 Aarti Chhabria Facts:
*She began modeling at age 3.
*Her debut Bollywood film was Tumse Achcha Kaun Hai (2002).
*She is fluent in English, Hindi, Marathi, Sindhi, and Gujarati.
*She was the winner of the fourth season of Fear Factor – Khatron Ke Khiladi in 2011.
*She is known to be a dancer and mimic who performs live as well as comperes shows with élan.
*She was also seen in the latest Kalyan jewels advertisement with Mr Amitabh Bachchan.
*She won the Miss India Worldwide 2000 pageant in November 1999.
*Follow Aarti on Twitter, Facebook and Instagram.