Radio and TV personality Adam Carolla is known for creating and starring in The Man Show, MTV’s Loveline and Crank Yankers. He is also known for playing the voice of Death on Family Guy after Norm Macdonald. He has also appeared on the network reality television programs Dancing with the Stars and The Celebrity Apprentice. He was born on May 27, 1964, in Los Angeles, California, USA to Kris McCall and Jim Carolla. He belongs to Italian and Irish descent. He has been married to Lynette Paradise since September 28, 2002. They have two children; son, Sonny and daughter, Natalia. He completed his schooling from Colfax Elementary School, Walter Reed Junior High, and North Hollywood High School, and briefly attended Los Angeles Valley College. 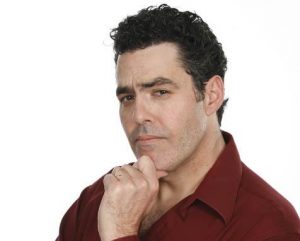 Adam Carolla Facts:
*His parents separated when he was young.
*His favorite musicians are John Hiatt and Graham Parker.
*He used to work as a carpet cleaner, boxing coach, carpenter and a traffic school instructor.
*Molly Ringwald and p*rn star Christy Canyon are his childhood friends.
*Visit his official website: www.adamcarolla.com
*Follow him on Twitter, YouTube, Facebook, Google+ and Instagram.