Adam DeVine is an American actor, voice actor, comedian, singer, screenwriter, and producer. He is best known for starring in and co-creating the Comedy Central series Workaholics. DeVine co-starred as Bumper Allen in the 2012 musical comedy film Pitch Perfect, for which he won a Teen Choice Award for Choice Movie Villain and received one nomination for Choice Movie Breakout. He reprised the role of Bumper in the film’s sequel Pitch Perfect 2 (2015). He is also known for his role in the sitcom Modern Family and has appeared in several films, including Neighbors, Mike and Dave Need Wedding Dates, The Intern, The Final Girls, Game Over, Man! and When We First Met. He has also done voice work in films including Ice Age: Collision Course and The Lego Batman Movie, and on animated series Uncle Grandpa, Vampirina, Penn Zero: Part-Time Hero, and Green Eggs and Ham. Born Adam Patrick DeVine on November 7, 1983 in Waterloo, Iowa, to parents Dennis and Penny DeVine, he was raised in Nebraska. He has an younger sister named Brittani. He attended Orange Coast College and later moved to Los Angeles to be a stand-up comedian. In 2006, DeVine formed the sketch comedy group Mail Order Comedy with Anders Holm, Blake Anderson, and Kyle Newacheck. He was in a relationship with his Pitch Perfect co-star Kelley Jakle from 2012 to 2014. In 2015, he began dating Pretty Little Liars actress Chloe Bridges. 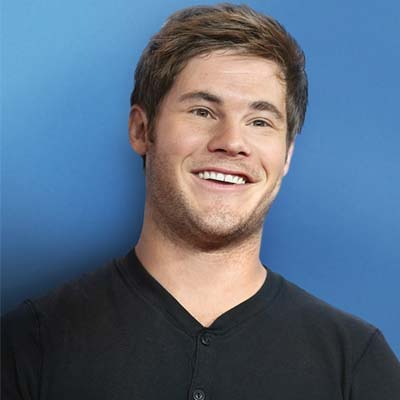 Adam DeVine Facts:
*He was born on November 7, 1983 in Waterloo, Iowa, USA.
*He graduated from Millard South High School in Omaha, Nebraska.
*He starred on the Comedy Central show Workaholics between 2011 and 2017.
*He is close friends with Pitch Perfect co-stars Brittany Snow and Skylar Astin.
*Follow him on Twitter, Facebook and Instagram.