Adam Scott is an Australian professional golfer who plays most of his golf on the PGA Tour. He is a former World Number 1 in the World Golf Ranking, from mid-May to August 2014. He has won 29 professional tournaments around the world, on many of golf’s major tours. He was the first Australian to win the Masters Tournament with his 2013 victory. Born in Adelaide, Australia, on July 16, 1980, to Pam and Phil Scott, Adam Derek Scott grew up in Adelaide and Queensland, and began playing tennis at age 4. He has been married to Marie Kojzar since 2014. Together they have one daughter, Bo Vera Scott born in 2015. 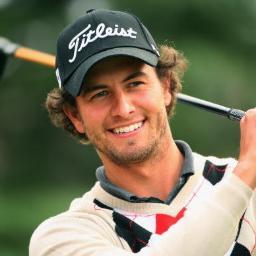 Adam Scott Facts:
*He was only 4 when he started playing golf.
*He turned professional in 2000.
*He is an avid surfer.
*He is a supporter of Australian football club Adelaide Crows.
*He was once in a relationship with former tennis World No. 1 Ana Ivanovic.
*Follow him on Facebook.