Gabriel Soto is a Mexican actor and model who won the national male pageant El Modelo Mexico, and represented Mexico in the 1996 Mister World pageant, where he placed 2nd (first runner-up). He was a member of the former Mexican boy band Kairo, and has starred in such telenovelas as Un refugio para el amor (English: A Shelter For Love), Yo no creo en los hombres (English: I Don’t Trust Men Anymore or I Don’t Believe In Men), and La fuerza del destino (English: The Power of Destiny). Soto was born Gabriel Soto Borja-Díaz in Mexico City, Distrito Federal, Mexico on April 17, 1975 to Elisa Díaz Lombardo and Francisco Soto-Borja Anda. Since February 2016, he has been married to Géraldine Bazán. Together they have two daughters, Elisa Marie and Alexa Miranda. 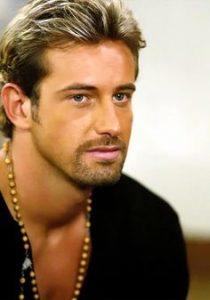