American actress and author Adrienne Barbeau was born Adrienne Jo Barbeau on June 11, 1945 in Sacramento, California, the daughter of Armene Nalbandian and Joseph Barbeau. Her father was of three quarters German, one eighth French, and one eighth Irish, ancestry. Her mother was of Armenian descent. Adrienne was married to director John Carpenter. She is now married to actor, playwright, and producer Billy Van Zandt. She is best known for her roles on the TV series Maude (1972) and in horror films, especially those directed by John Carpenter. The Scream Queen is very beautiful lady with natural brunette hair, Voluptuous figure and large brown eyes. 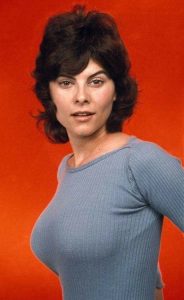 Adrienne Barbeau Facts:
*Surrogate daughter of Bea Arthur.
*She is of Armenian, German, French and Irish descent.
*Sister-in-law of musician and actor Steven Van Zandt.
*Won the prestigious Theater Guild Award for her portrayal of Betty Rizzo in the original Broadway production of “Grease”.
*Her roles in the horror film The Fog (1980) and Escape from New York (1981) were written specifically with her in mind.
*Follow her on Twitter, Facebook and Instagram.