Aimee-Ffion Edwards is a Welsh actress and voice actress. She is best known for television roles as Sketch on Skins, Esme Shelby on Peaky Blinders, Sophie on Detectorists and Abi on Loaded. She has also done voice work in 101 Dalmatian Street, Thunderbirds Are Go, and Everybody’s Gone to the Rapture. Born on November 21, 1987 in Newport, Monmouthshire, Wales, Edwards was educated at Ysgol Gymraeg Casnewydd (Newport Welsh medium primary school) and Ysgol Gyfun Gwynllyw. She made her acting debut in the 2002 short film Dwr Dwfn. 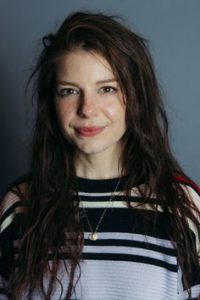 Aimee-Ffion Edwards Facts:
*She was born on November 21, 1987 in Newport, United Kingdom.
*She played rugby and was the only girl on a boys’ team, until she was 14.
*She made her television debut as Sketch in the E4 series Skins in 2008.
*She made her Broadway debut in 2011 in the play Jerusalem.
*She is fluent in both English and Welsh.