Ellie Kemper is an American actress and comedian. She is best known for her portrayal of Kelly Erin Hannon on NBC’s The Office, and for her role as Kimmy Schmidt on the Netflix comedy series Unbreakable Kimmy Schmidt, for which she has received two nominations for the Primetime Emmy Award for Outstanding Lead Actress in a Comedy Series. She has also played prominent roles in the films Bridesmaids and 21 Jump Street. In 2018, Kemper published her first book, My Squirrel Days. Born Elizabeth Claire Kemper on May 2, 1980 in Kansas City, Missouri, to parents Dorothy Ann and David Woods Kemper, her ancestry includes Italian (from her maternal grandfather), German, English, Scottish, Danish, and Irish. She graduated in 2002 with a degree in English from Princeton University, and subsequently studied English for a year at Oxford University. She has been married to Michael Koman since July 7, 2012. They have two sons together. 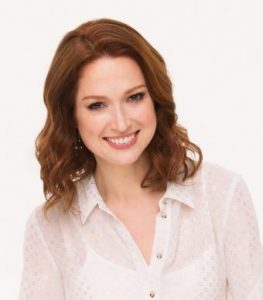 Ellie Kemper Facts:
*She was born on May 2, 1980 in Kansas City, Missouri, USA.
*She is the older sister of television writer Carrie Kemper.
*She played Kelly Erin Hannon in the NBC comedy series The Office from 2009 to 2013.
*She published her first book, entitled My Squirrel Days in 2018.
*Follow her on Instagram.