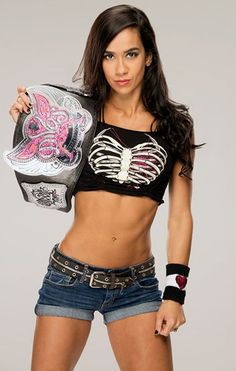 Born April Jeanette Mendez on March 19, 1987 in Union City, New Jersey, to parents Janet and Robert Mendez, she is of Puerto Rican descent. Lee is the youngest of three children, with brother Robert and sister Erica. She graduated from Memorial High School in West New York, New Jersey, and went to Tisch School of the Arts at New York University and majored in film and television production, and writing. She married fellow wrestler Phil Brooks, aka CM Punk, in June 2014. Lee previously dated her trainer Jay Lethal as well as WWE champ Dolph Ziggler.

AJ Lee Facts:
*She was born on March 19, 1987 in Union City, New Jersey, USA.
*Grew up idolizing Amy Dumas aka Lita, Lee decided to become a professional wrestler at the age of 12.
*She began her professional wrestling career on the state’s independent circuit in 2007.
*She signed with WWE in 2009.
*She was WWE Diva of the Year 2012 and is the youngest general manager in WWE history.
*She won her first WWE Divas Championship in June 2013.
*She retired from in-ring competition in the WWE on April 3, 2015.
*Her 2017 memoir, Crazy Is My Superpower, debuted at #10 on The New York Times Best Seller list for hardcover non-fiction.
*She is close with “Paige” Ms. Jade Bevis.
*Visit her official website: www.theajmendez.com
*Follow her on Twitter, Facebook and Instagram.