AJ Michalka is an American actress, singer and songwriter who is one half of the American pop rock duo ’78viole’ alongside her sister Aly Michalka whose songs include Do You Believe in Magic and Rush. She is also known for her recurring role as Lainey Lewis on the ABC comedy series The Goldbergs. Before becoming an actress, Michalka was a model. Born Amanda Joy Michalka in Torrance, California, on April 10, 1991, she is the daughter of Mark and Carrie Michalka, and younger sister to Aly Michalka, who is also an actress and musician. She is of German descent on her father’s side, and of German, English, Irish, Scottish and Welsh descent on her mother’s side. 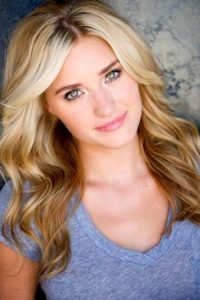 AJ Michalka Facts:
*She was only 4 when she started playing piano.
*She is a member of the girl band 78violet, which she formed with her older sister.
*Her song “It’s Who You Are” was used in the film Secretariat.
*Her favorite artists are Aqualung, Jack’s Mannequin, POD, Coldplay, Switchfoot and Heart.
*She is best friends with Mitchel Musso, and friends with Sara Paxton, Ashley Tisdale, Zelda Williams and Christian Serratos.
*Her hobbies include cooking, dancing, horseback riding, mountain biking, reading and hanging out with her dogs and family.
*Follow her on Twitter and Instagram.