Akkineni Nagarjuna is an Indian film actor, producer and television presenter who works predominantly in the Telugu Cinema, in addition to Tamil and Hindi films. With numerous awards to his credit, Nagarjuna is often called “King” of Telugu Movie Industry. His accolades include nine state Nandi Awards, three Filmfare Awards South and one Special Mention at the National Film Awards. He made his film debut in 1986, with the film Vikram. Since then he has worked in over 90 films. His notable film credits include Ninne Pelladatha, Geetanjali, Siva, Azad, Annamayya, Vikram, Prema Katha, Oopiri, Yuvakudu, Santosham, Manmadhudu, Sri Ramadasu, Rajanna and Mass. Born as Akkineni Nagarjuna Rao on August 29, 1959, in Chennai, Tamil Nadu, India, Nagarjuna is the son of veteran actor Nageswara Rao Akkineni and Annapoorna Akkineni. He completed his schooling at Hyderabad Public School and later attended Little Flower Junior College to do his intermediate. After that, he went on to do mechanical engineering at the University of Michigan, Ann Arbor, MI and later got a masters degree in automobile engineering at San Jose State University. He has been married to Amala Akkineni since 1992. He was previously married to Lakshmi Ramanaidu Daggubati. He has two sons, Naga and Akhil. 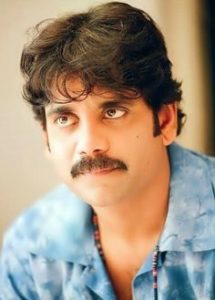 Akkineni Nagarjuna Facts:
*He started acting as a child artist in the 1967 Telugu film Sudigundalu.
*He appeared in his 100th film, Greeku Veerudu, in 2012.
*He owns major stake in MAA TV (Telugu Channel) along with Chiranjeevi.
*Follow him on Twitter.