American-born Senegalese singer and songwriter who rose to prominence through his first single “Locked Up” from his debut album Trouble, which was released in 2004. His other single hits include ‘Lonely’, ‘Smack That’ and ‘I Wanna Love You’. Born as Aliaume Damala Badara Akon Thiam in St. Louis, Missouri, USA on April 16, 1973, Akon is the son of Kine Gueye Thiam and Mor Thiam. He spent most of his childhood in Senegal, and moved to Newark, New Jersey at age 7. 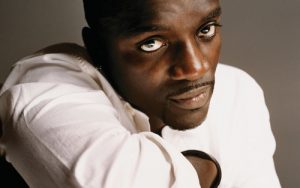 Akon Facts:
*His mother was a dancer while his father a jazz percussionist.
*He learned to play the drums, guitar, and djembe before he was seven.
*He has never had alcohol, nor has he ever smoked.
*He owns a diamond mine in South Africa.
*He has his own clothing line named Konvict Clothing.
*Follow him on Twitter, YouTube, Myspace, Facebook and Instagram.