Alanna Masterson is an American actress, best known for her role as Tara Chambler on the AMC series The Walking Dead. She also played Abby in seven episodes of the 2010 series First Day and had a recurring role in the fourth season of the ABC series Mistresses. Born on June 27, 1988 in Long Island, New York, USA, to parents Carol Masterson, a manager, and Joe Reaiche, a former Australian Rugby League football player, she is of Lebanese descent on her father’s side, and of Irish descent on her mother’s side. She has three older brothers: full brother, Jordan Masterson, and two half-brothers, Danny Masterson and Christopher Masterson. She has a daughter with her boyfriend Brick Stowell. 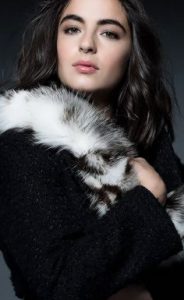 Alanna Masterson Facts:
*She was born on June 27, 1988 in Long Island, New York, USA.
*Her father was born in Australia, to Lebanese parents.
*She belongs to both Irish and Lebanese descent.
*She portrayed Tara Chambler on AMC’s post-apocalyptic horror series The Walking Dead.
*She is best friends with actress Hilary Duff.
*She is one of the high profile members of the Church of Scientology.
*Follow her on Twitter and Instagram.