Amanda Seyfried is an American actress, singer-songwriter and model. She is best known for her roles in the films Nine Lives, Mamma Mia!, Mean Girls, Jennifer’s Body, Les Misérables, Letters to Juliet, and Dear John. She is also known for her roles as Sarah Henrickson on HBO’s television series Big Love, and Lilly Kane on UPN’s television series Veronica Mars. Seyfried won a ShoWest Breakthrough Female Star of the Year Award in 2010. Born Amanda Michelle Seyfried on December 3, 1985 in Allentown, Pennsylvania, USA, to parents Ann and Jack Seyfried, her older sister, Jennifer Seyfried is a musician. She belongs to German, and some English and Scottish descent. She began modeling when she was eleven and landed a recurring role in the long-running soap opera As the World Turns (1956) when she was just age 15. She attended and graduated in 2003 from William Allen High School, Allentown, Pennsylvania. Seyfried made her film debut in the 2004 teen comedy Mean Girls. She is married to actor Thomas Sadoski, with whom she has a daughter, Nina Sadoski Seyfried. She was previously in a relationship with Dominic Cooper (October 2007-May 2010), Ryan Phillippe (October 2010-May 2011), James Franco (2012), and Justin Long (2013-2015). 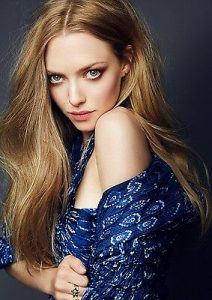 Amanda Seyfried Facts:
*She was born on December 3, 1985 in Allentown, Pennsylvania, USA.
*Her father is a pharmacist, and her mother is an occupational therapist.
*She has struggled with anxiety disorder and panic attacks.
*She began modeling when she was just eleven years old.
*She used to work as a waitress in a retirement community.
*People Magazine named her one of the top 100 Most Beautiful People in the World in 2009 and 2010.
*She was ranked #2 in Who magazine’s “Most Beautiful People” in 2010.
*She was ranked #1 on People magazine’s “25 Beauties (and Hotties) at 25” list in 2011.
*In 2012, she was named as having the “Sexiest lips” by Victoria’s Secret What Is Sexy list.
*She is good friends with Jennifer Carpenter and Nikki Reed.
*She has an Australian shepherd dog named Finn.
*She enjoys dancing, singing, painting and playing tennis.
*Follow her on Twitter, Facebook and Instagram.