Jorge Garcia is an American actor and comedian, best known for his role as Hugo “Hurley” Reyes in the American television show Lost. His other television credits include Alcatraz, Becker, Once Upon a Time, iSteve, and Hawaii Five-0. His movie credits include Ridiculous 6, Little Athens, Deck the Halls, and computer-animated comedy film Rock Dog. Born Jorge Fernando Garcia on April 28, 1973 in Omaha, Nebraska, USA, to parents Dora Mesa and Humberto Garcia, his mother is a Cuban-born professor, and his father is a Chilean-born doctor. Jorge was raised in San Juan Capistrano in Orange County, California and attended San Clemente High School. He majored in communication studies at the University of California, Los Angeles. He first achieved fame with his role as Hector Lopez on the television show Becker. He portrayed the role of Hugo “Hurley” Reyes in the television series Lost from 2004 to 2010. Garcia was in a long term relationship with Bethany Shady, whom he had been dating for over seven years. They split in 2013. 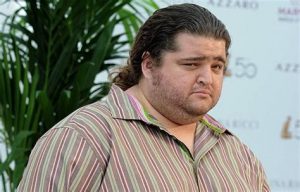 Jorge Garcia Facts:
*He was born on April 28, 1973 in Omaha, Nebraska, USA.
*He belongs to both Cuban and Chilean descent.
*He graduated in 1995 from the University of California Los Angeles (UCLA) as a Communication Studies major.
*He studied acting at the Beverly Hills Playhouse acting school.
*Best known for playing Hugo on the ABC television series Lost.
*He appeared on the cover of Weezer’s 2010 album Hurley.
*He was on the High School Wrestling team.
*Follow him on Twitter and Instagram.