Alejandro Davidovich Fokina is a Spanish professional tennis player who achieved a career-high singles ranking of World No. 45 on May 17, 2021, and a doubles ranking of world No. 213 on May 17, 2021. Turning professional in 2019, Davidovich Fokina reached his first Grand Slam quarter-final at the 2021 French Open defeating Federico Delbonis in four sets. 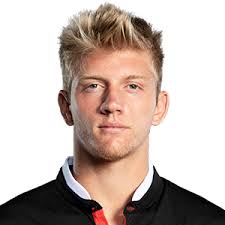 Born on June 5, 1999 in Málaga, Spain, to Russian parents Edvard Davidovich and Tatiana Fokina, he has a brother named Mark. Davidovich Fokina started playing tennis with his father at the age of three. At 5, he started training at Calaflores and later Serramar tennis courts with coach Manolo Rubiales.

Alejandro Davidovich Fokina Facts:
*He was born on June 5, 1999 in Málaga, Spain.
*He began playing tennis at age 3.
*He began his professional tennis career in 2016.
*He won his first ATP title in doubles at the 2020 Chile Open in Santiago, partnering with fellow Spaniard Roberto Carballés Baena.
*He missed the 2021 Australian Open after testing positive for COVID-19.
*He is known for having one of the best drop shots on the ATP Tour, and for his excellent returns, often finding sharp angles.
*Follow him on Twitter and Instagram.