Greek professional tennis player who achieved a career-high singles ranking of World No. 18 on May 17, 2021, and a doubles ranking of world No. 169 on September 9, 2019. Turning professional in 2015, Sakkari has won one singles title on the WTA Tour, at 2019 Morocco Open, where she defeated Johanna Konta in the final. She was also semifinalist of 2017 Wuhan Open, where she defeated Caroline Wozniacki en route, her first top-10 win. 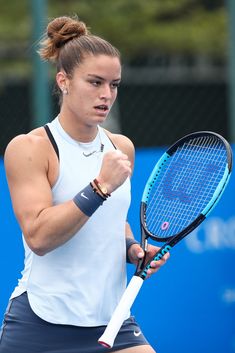 Born on July 25, 1995 in Athens, Greece, to parents Angeliki Kanellopoulou and Kostas Sakkaris, she has a brother named Yannis and sister named Amanda. Maria was introduced by her parents to tennis at age 6 and moved to Barcelona at age 18 in order to train.

Maria Sakkari Facts:
*She was born on July 25, 1995 in Athens, Greece.
*Her mother was also a professional tennis player.
Growing up, her favourite players were Serena Williams, Roger Federer and Rafael Nadal.
*She made her debut for the Greece Fed Cup team in 2012.
*She turned professional in 2015.
*Her favorite surfaces are hard and clay and that her favorite shot is serve
*Follow her on Twitter, Facebook and Instagram.