Alessandro Borghese is an Italian chef and television personality born in San Francisco, California, USA. He is recognized for hosting a variety of cooking shows in Italy, such as Alessandro Borghese 4 Ristoranti, Cucina con Ale and Alessandro Borghese Kitchen Sound. He has worked as a cook in several cities like London, San Francisco and Paris. In 2014, he was a judge for Junior MasterChef Italia. His television career began in 2004, when Magnolia contacted him to lead a kitchen program on the then-nascent Sky digital platform, Guest Cortesie. He published his first cookbook, The dress does not cook, in October 2009. He was born Alessandro Borghese on November 19, 1976 in San Francisco, California, USA. He is the eldest son of actress Barbara Bouchet and Luigi Borghese, and has a younger brother named Massimiliano Borghese. He attended and graduated from Rome International School, Rome. He has been married to Wilma Oliviero since 2009. They have two daughters, Arizona and Alexandra. 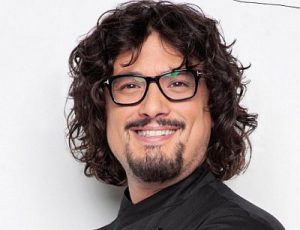 Alessandro Borghese Facts:
*He is the eldest son of actress Barbara Bouchet and Luigi Borghese.
*He owns a company, AB Il Lusso Della Semplicitá, dedicated to banqueting and catering for major events.
*He dub Morad Sumar in the animated series Star Wars Rebels.
*Follow him on Twitter, Facebook, YouTube and Instagram.