American actor who is known for his role as the vampire Angel on the supernatural drama series Buffy the Vampire Slayer and Angel, and as FBI Special Agent Seeley Booth on the television crime drama Bones. He was born on May 16, 1969 in Buffalo, New York, USA as David Paul Boreanaz. He is the son of Patti Boreanaz, a travel agent, and Weather forecaster Dave Roberts, and brother to Bo and Beth Boreanaz. His mother is of half Slovak ancestry and his father is of Italian descent. He has been married to Jaime Bergman since 2001. They have two children. He was previously married to Ingrid Quinn. 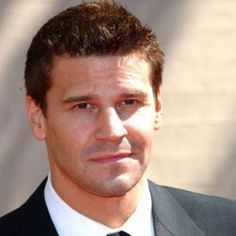 David Boreanaz Facts:
*His father is weather forecaster for ABC owned WPVI-TV and his mother is a travel agent.
*He was discovered while walking his dog by his neighbor.
*People Magazine named him one of the top 50 Most Beautiful People in the World in 1999.
*He was ranked #2 of the Top Ten Sexiest Men of the Buffy / Angel universe.
*While growing up, he was a keen athlete and played on the school football team.
*Follow him on Twitter, Facebook and Google+.