Alessia Merz is an Italian model, television host, actress and showgirl. She took part in the Canale 5 show Striscia la notizia, where she acted as dancer within Cristina Quaranta until 1996. She played a role in the 1995 film Ragazzi della notte and debuted as television host in the first edition of the show Meteore. Born on September 24, 1974 in Trento, Trentino-Alto Adige, Italy, she debuted in 1992 in the Canale 5 show Bulli e pupe. Since June 11, 2005 she has been married to footballer Fabio Bazzani. They have two children: son Niccolò and daughter Martina. 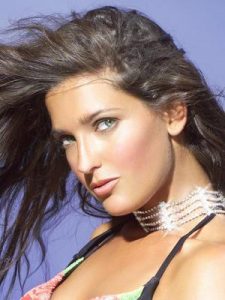 Alessia Merz Facts:
*She was born on September 24, 1974 in Trento, Trentino-Alto Adige, Italy.
*She made her debut in 1992 in the Canale 5 show Bulli e pupe.
*She was chosen by Antonio Ricci as a tissue for the 1995-1996 season of Striscia la notizia.
*She was the television presenter of the show Meteore.
*She married footballer Fabio Bazzani in 2005 and has two children.