Alex Borstein is an American actress, voice actress, writer, and comedian, best known for providing the voice of Lois Griffin on the animated comedy series Family Guy, for which she received a Primetime Emmy Award from multiple nominations. She was a cast member on the sketch comedy series MADtv. Borstein’s other notable works include Getting On, Casper and Power Rangers: Zero, The Marvelous Mrs. Maisel, Robot Chicken, The Lizzie McGuire Movie, Catwoman, Good Night, and Good Luck, The Cleveland Show, Dinner for Schmucks, Ted, ParaNorman, and A Million Ways to Die in the West. For her performance on season one of The Marvelous Mrs. Maisel she won an Emmy in 2018. Born Alexandrea G. Borstein on February 15, 1971 in Highland Park, Illinois, she is the daughter of Judith and Irving J. Borstein. After graduating from Chatsworth High School in 1989, Borstein attended San Francisco State University, where she studied rhetoric. [© celebsfacts.com] Borstein was trained in comedy at the ACME Comedy Theatre, and was selected to join MADtv after being searched by talent agents who noticed her comedy work at the theatre. She married Jackson Douglas in 1999, and the couple had a son named Barnaby and a daughter named Henrietta before getting divorced in 2017. 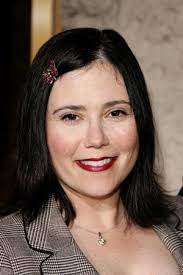 Alex Borstein Facts:
*She was born on February 15, 1971 in Highland Park, Illinois, USA.
*Her parents are mental health professionals.
*She studied at San Francisco State University.
*She owns a production company called Crackerpants Inc.
*Her school bus driver was John Malkovich.
*Visit her official website: www.alexborstein.com
*Follow her on Twitter and Instagram.