Alex O’Loughlin is an Australian actor. He is best known for playing the role of Lieutenant Commander Steve McGarrett in the hit television series Hawaii Five-0. He can also be recognized for his roles in television, such as Moonlight and Three Rivers, and in the films Oyster Farmer and The Back-up Plan. For his role in The Incredible Journey of Mary Bryant, he was nominated for the Australian Film Institute’s Best Lead Actor in Television. Born Alexander O’Loughlin in Canberra, Australia, on August 24, 1976, his mother is a nurse and his father is a physics and astronomy teacher in Sydney. He belongs to Irish and Scottish descent. He has a younger sister named Jackie. He has been married to Malia Jones since 2014. He has two sons, Saxon and Lion. He is a 2002 graduate of Australia’s National Institute of Dramatic Art. 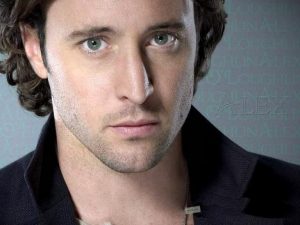 Alex O’Loughlin Facts:
*His parents got divorced when he was two years old, and his father move to Sydney to teach at a private boy’s school.
*As a child, he was a fan of the heavy-metal band Iron Maiden.
*He enjoys riding motorcycles, climbing rocks, music, and playing his guitar.
*Once used to work as a plumber’s apprentice.
*Follow him on Facebook.