Alex Turner is an English musician, best known as the frontman and principal songwriter of the indie rock band Arctic Monkeys, with whom he has recorded six studio albums. The band’s debut album, Whatever People Say I Am, That’s What I’m Not (2006), became the fastest selling debut album in UK chart history, and has been hailed as one of the greatest debut albums. 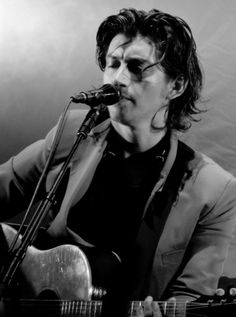 Born Alexander David Turner on January 6, 1986 in Sheffield, England, his father David, is a music teacher and his mother Penny, is a German teacher. He was educated at Stocksbridge High School and Barnsley College. He has dated Johanna Bennett, Alexa Chung, Taylor Bagley, Arielle Vandenberg, and Louise Verneuil.

Alex Turner Facts:
*He was born on January 6, 1986 in Sheffield, England.
*He used to listen to lots of Roots Manuva raps as a child.
*He began playing guitar at the age of 15.
*Lead vocalist, songwriter, guitarist of the English indie rock band Arctic Monkeys, alongside lead guitarist Jamie Cook, drummer Matt Helders, and bassist Nick O’Malley.
*He plays keyboards, guitar, drums, percussion, and bass.
*He can also speak German.
*Follow him on Instagram.