Fabio Fognini is an Italian professional tennis player who achieved a career-high singles ranking of World No. 9 on July 15, 2019, and a doubles ranking of world No. 7 on July 20, 2015. Turning professional in 2004, Fognini has won nine ATP singles titles. Together with Simone Bolelli, Fognini won the 2015 Australian Open doubles championship, becoming the first all-Italian men’s pair to win a Grand Slam title in the Open era. 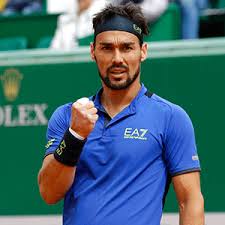 Born on May 24, 1987 in Sanremo, Italy, to parents Silvana and Fulvio Fognini, he has one younger sister named Fulvia. He has been married to Flavia Pennetta since 2016. They have two children.

Fabio Fognini Facts:
*He was born on May 24, 1987 in Sanremo, Italy.
*He began playing tennis at age 4.
*He turned professional in 2004.
*He reached the quarterfinals of the 2011 French Open.
*He is fluent in Italian, English, Spanish, and French.
*He enjoys motorbike racing and is a fan of Valentino Rossi.
*He tested positive for COVID-19 in October 2020.
*Visit his official website: www.FabioFognini.eu
*Follow him on Twitter, Facebook and Instagram.