British fashion designer who worked as chief designer at Givenchy from 1996 to 2001, and founded his own Alexander McQueen label in 1992. McQueen was the recipient of four British Designer of the Year awards (1996, 1997, 2001 and 2003), as well as the CFDA’s International Designer of the Year award in 2003. Born Lee Alexander McQueen on March 17, 1969 in Lewisham, London, United Kingdom, his father, Ronald, was a taxi-driver, and his mother, Joyce, taught social science. He died on February 11, 2010 in Mayfair, London. 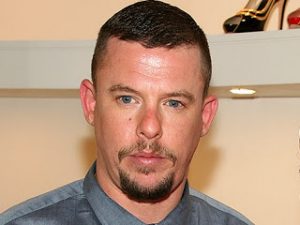 Alexander McQueen Facts:
*Born on March 17, 1969 in Lewisham, London, United Kingdom, he was of Scottish descent.
*He started drawing at age three.
*He aspired to become a designer from a very young age.
*He was head designer of the Louis Vuitton Givenchy fashion line.
*He won the 2003 CFDA International Designer of the Year award.
*He was awarded the Commander of the Order of the British Empire in the 2003 Queen’s Birthday Honours List for his services to the fashion industry.
*He was openly gay.
*He suffered from depression since the suicide of his close friend Isabella Blow.
*His mother passed away a week before he died.
*On 11 February 2010, McQueen died by suicide, at the age of 40, at his home in Mayfair, London.
*He was in a committed relationship with George Forsyth at the time of this death.
*Visit his official website: www.alexandermcqueen.com