Roger Hazard is an American designer, television presenter and producer who originated the role of home stager and designer on A&E’s Sell This House from its debut in 2003 through 2011. He has also appeared on Move This House and contributed to Sell This House: Extreme, both for A&E. Born on April 27, 1959 in Houston, Texas, Hazard attended Texas A&M University and was a member of the university’s Corps of Cadets. He is married to Chris Stout. 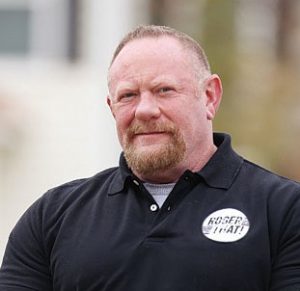 Roger Hazard Facts:
*He was born on April 27, 1959 in Houston, Texas, USA.
*He studied Horticulture and Architectural Design at Texas A&M University.
*Known mostly as the home stager and designer on Sell This House.
*In 2012, Hazard and husband Chris Stout, launched Roger + Chris, a furniture and home design company.
*Visit his official website: www.rogerandchris.com
*Follow him on Facebook and Instagram.