Aubrey Plaza is an American actress and comedian. She is best known for starring as April Ludgate in the NBC sitcom Parks and Recreation, and as Amahl Farouk / Shadow King and Lenny Busker in the FX drama series Legion. Plaza has also starred in such films as Safety Not Guaranteed, Mystery Team, Funny People, Scott Pilgrim vs. the World, Monsters University, Life After Beth, Dirty Grandpa, Mike and Dave Need Wedding Dates, The Little Hours, Ingrid Goes West, An Evening with Beverly Luff Linn and Child’s Play. In 2014, she provided her voice for Grumpy Cat in the Lifetime Network’s original movie Grumpy Cat’s Worst Christmas Ever. Born Aubrey Christina Plaza on June 26, 1984 in Wilmington, Delaware, to parents Bernadette and David Plaza, she is of Puerto Rican descent on her father’s side, and of German, English, Irish, and Swiss-German descent on her mother’s side. Plaza has two younger sisters named Natalie and Renee. She graduated from New York University’s Tisch School of the Arts in 2006. She has been in a long term relationship with writer and director Jeff Baena. 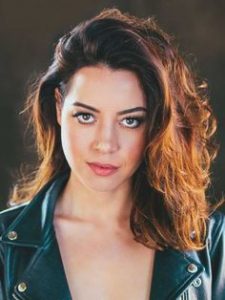 Aubrey Plaza Facts:
*She was born on June 26, 1984 in Wilmington, Delaware, USA.
*Her parents are Bernadette Plaza and David Plaza.
*She studied film at New York University’s Tisch School of the Arts.
*She began her career as an intern.
*She had her first leading role as Darius Britt in the 2012 comedy Safety Not Guaranteed.
*She is friends with Chris Pratt.
*At age 15, she dated actor John Gallagher Jr.
*Follow her on Twitter, Tumblr and Instagram.